During my years in the seminary there was a fellow seminarian named Mike Joly.  Mike had lost his eyesight at 6 years old due to a brain tumor.  While in college he remembered a specific time when he knew there was more to life than what he was living.  This discovery led him to enter the seminary.

While in seminary Mike was amazing: he had many friends; he served on the altar as a deacon; he even played the piano at Mass.

Since his ordination he has participated in Parish Ministry, High School and College Campus Ministry, was a Retreat Director at a large Retreat Center and currently conducts parish missions and is a Pastor.  Mike’s faith is shown in the following quote: “Having the light turned out in your life means we can only look inside; I couldn’t ignore God inside of me.”  The story of Fr. Mike Joly helps us to understand the Gospel.  The Gospel not only portrays a story of powerful healing but of growth in faith.

While in Jerusalem, Jesus encounters a man that was born blind. Jesus makes a paste from the dust of the earth and places it on the man’s eyes.  Jesus commands “Go, wash in the Pool of Siloam (which means the Sent One).”  The man responds unquestioningly.  The name of the pool shows that it is Jesus, the Sent One who affects the cure of the man born blind.

After washing in the Pool, the man returns seeing and is greeted by neighbors who cannot believe that he was the one born blind.  Asked how this happened he merely states that Jesus commanded him to wash in the pool.  The action of Jesus does not lead to praise of God but to division among the people.  Some people do not believe that this was the man who they once knew.  At the same time, it seems that the man born blind does not know the identity of Jesus.

Hauled next before the Pharisees, who are concerned about the Sabbath healing, he again repeats what Jesus did.  An argument begins between the man born blind and the Pharisees as to whether Jesus is of God.   The man states that he believes that Jesus is “a prophet.”  The answer shows a growth in faith.

Summoned again by the leaders, the man is immediately confronted with the charge that Jesus is a sinner.   Ultimately the man born blind says, “if he were not from God he could do nothing.”  In anger they expel him from the synagogue.    The leaders fail to see what is right before their eyes: a man who has been healed by the power of God.  They are blind to God working outside the structures of their religious belief.  They will not accept that Jesus is from God.

Doubted by friends and neighbors (vv. 8-12), abandoned by his parents (vv. 18-23), questioned, insulted and cast out by “the Jews” he is “found” by Jesus, who asks, “Do you believe in the Son of Man?”  When he asks, "Who is the Son of Man?” Jesus says, “You have seen him..." – a wordplay on sight which shows that the true faith that this man has been given is faith.  The man replies, “Lord, I believe.”  The man shows that he believes that Jesus reveals God and so he worships Jesus.  He grows from seeing Jesus as a man, to a prophet, to a suggestion that he must be from God and he finally prostrates himself before Jesus.  This man’s journey from blindness to sight was “that the works of God might be made manifest in him.”   Jesus is challenging the man to see that God is made known through him.

The religious leaders never make the journey of faith in Jesus.  They are so certain, so smug in what they think they know that their certainty prevents them from openness to Jesus and to his authority from God.  The blind man moves toward sight while the Jewish leaders toward blindness.  Through opposition and persecution, the blind man moves to a confession of Jesus as the Son of Man and Lord.  The man born blind comes to see on physical and spiritual levels, while those who seemed perfectly well become increasingly blind. 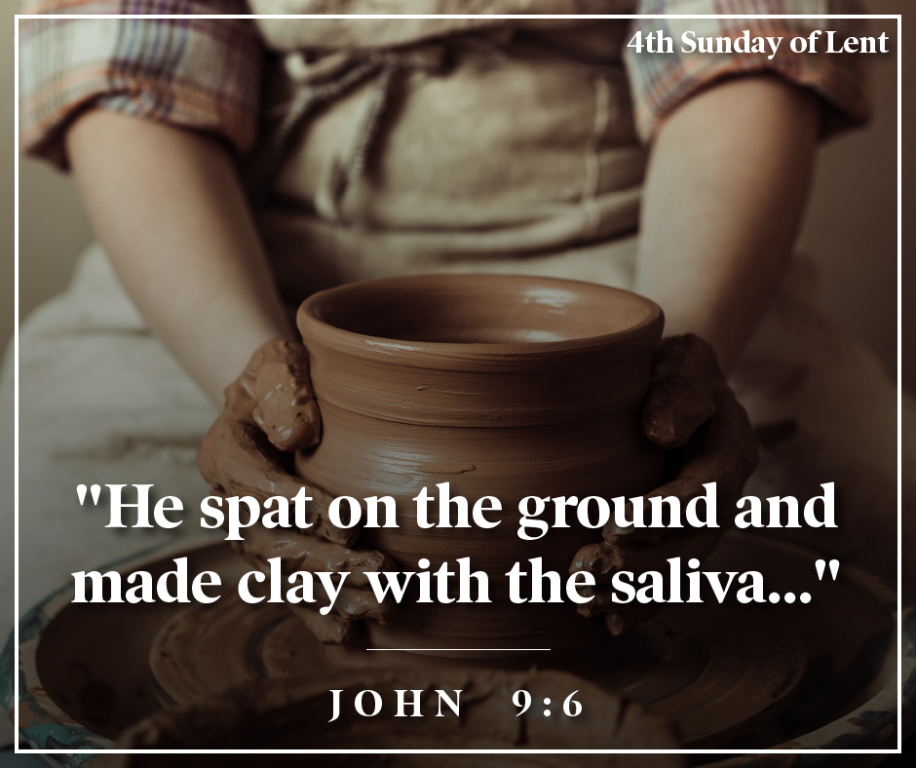