I am Nicholas Duncan. I was born in Wichita, KS. I have three brothers. The two younger brothers live in Amarillo, TX, while my older brother lives in Oklahoma City. My family moved to Shreveport when I was in the 1st grade. My Father was the manager of the K-mart on Mansfield Road. Previously, we lived in Corpus Christi, TX, Lubbock, TX, and Garden City, KS. When I was a senior in High School my family moved to Waco, TX, five years later they moved to Amarillo, TX, and my parents currently reside in the town of Eunice near Lafayette, LA. When we lived in Shreveport, we were parishioners at St. Mary of the Pines. I attended Summerfield Elementary, Broadmoor Middle School, and Southwood High School. On completion of high school, I attended Louisiana Tech University graduating with a B.S. in Kinesiology and Health Promotion. In high school I played football and soccer. In college I started playing rugby and continued to play for over a decade. Before entering seminary I was a teacher at Griffin Middle Academy in Lake Providence, LA and at Beekman Charter School in Morehouse Parrish. Both schools are located in the Eastern Deanery of the Diocese, the northeastern section of the state. I taught Life Science, Louisiana History, and World Geography. At Beekman Charter I also coached middle and high school football. I applied to be accepted as a seminarian for the Diocese of Shreveport in 2015. For the last 5 years I have attended Notre Dame Seminary in New Orleans. At Notre Dame I completed a two-year pre-theology program earning a Bachelors in Philosophy, and have completed three of the four years in the theology program. I have developed a devotion to St. Francis De Sales. I participated in a variety of intramural sports including flag football, basketball, soccer, volleyball, and wiffleball. At seminary I have been actively involved in ministry to a local New Orleans nursing home and involved in outreach to the black catholic community. I was ordained to the transitional diaconate on June 3 and will be ordained to the priesthood in the spring of 2022. I look forward to serving the parishioners of St. Elizabeth Ann Seton until I return to seminary in October. 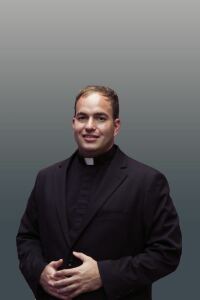